How we stop Brexit

The Liberal Democrats have dedicated more money, and more time and more of our key campaigners to stopping Brexit.

We've still got time to stop Brexit and we're ramping up our campaign. Big time.

And it’s working. So far we have:

A People’s Vote has gone from a fringe opinion to the mainstream, with 51% of people backing giving the people the final say. 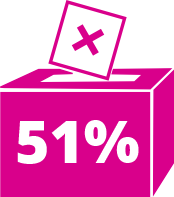 And as a result, the number of people who support giving the people the final say on Brexit has grown from 20% to 51%.

A People’s Vote has gone from a fringe opinion to the mainstream.

More and more MPs are joining the Liberal Democrat position and saying they support giving people the final say – and journalists continue to put pressure on those MPs who identify as Remainers – but won’t back the people.

In short – we are winning the argument.

But that was just the first stage.

To stop Brexit, we have to go bigger.

Over the next six months, we are preparing to:

We’re going to drive our message home with the voters who need to hear it - by taking our campaign of online advertising and direct mail to the next level.

The Tories' squabbling and in-fighting on Brexit is a national embarrassment.

They are not acting in the interest of the country.

And Labour aren’t any better. They aren’t acting like much of an opposition – in fact on Brexit they aren’t saying much at all.