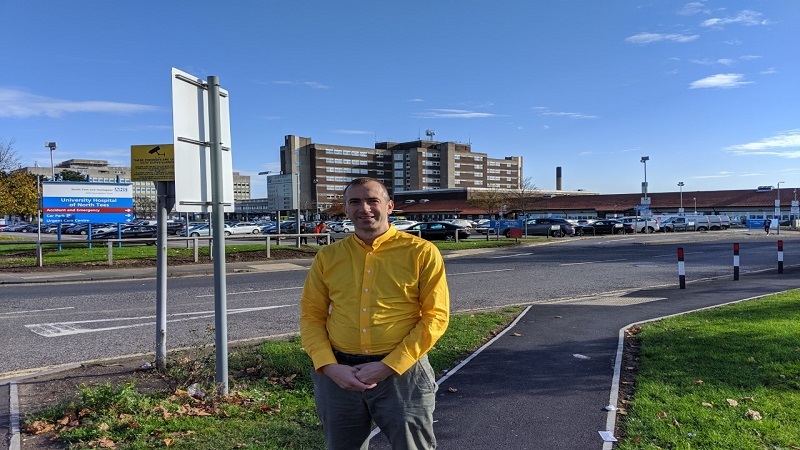 Aidan was born in 1979 and grew up in Newcastle upon Tyne. He went to school at Heaton Manor. He studied pharmacy at Manchester University 1998-2002, and worked as a pharmacist. He then wanted to take on closer clinical responsibility and retrained as a Doctor at Newcastle University 2006-2010, working as an NHS hospital doctor since training in internal medicine as a physician.

In 2016 he worked on The Remain campaign as a volunteer. In 2017 he self-built his own home in Newcastle (completing: foundations, structure, plumbing, electrics and fitting/finishing himself). In 2018 he was elected to Newcastle council for the area he built his home. He has since been leading a campaign for the construction of a new GP surgery for his ward. He is a Trustee of a large housing charity the St Mary Magdalene and Holy Jesus Alms-house.

He has campaigned against Brexit: speaking at peoples vote events with Vince Cable, Anna Turley and Phil Wilson, led a people’s vote march through Sunderland with Anna Soubry, multiple panel appearances with European Supergirl and Femi amongst others. In 2019 he was elected to the Liberal Democrat list of candidates for the European Union elections in the northeast region and ran to STOP Brexit which he believes will make all the people of the northeast poorer and less secure. He believes technology and innovation to help solve climate change and the internet of things with 5G delivered by all European innovation.

He lives in the home he built in the greatest region of the United Kingdom, the northeast, with his wife and two sons. He supports Newcastle United and plays 5-a-side footy with old mates on a weekly basis.