Catch up on the latest on the Liberal Democrats campaign in Stoke-on-Trent Central and find out how you can help:

Polling day in the Stoke-on-Trent by-election is just 8 days away and it's been quite a campaign so far, mostly thanks to the "antics" of the UKIP & Labour candidates.

We began with Paul Nuttall being accused of lying about his home on his nomination papers, leading to this exchange with Michael Crick.

UKIP's Paul Nuttall asked why he listed residence he's never been to as current "home" on nomination form. Party said he was moving today. pic.twitter.com/Q8kq1BekrS

He's also in the past said he wanted to privatise the NHS, thinks climate change is a "hare-brained theory", called gay equality "a complete joke", wants to bring back the death penalty and make it harder for women to have abortions, thinks Torture is a "price worth paying" and wants to leave the EU today, no matter the consequences.

Earlier in the campaign he got caught out, unable to name the main towns that make up Stoke and just yesterday he was again in the papers for claiming on his website that he lost close personal friends at Hillsborough, a claim that he later denied on radio and then threw a staff member under the bus for.

Nuttall's propensity to indulge in what we'll charitably call "alternative facts" - combined with his awful political views show just how important it is we keep him out of Parliament.

Labour haven't exactly covered themselves in glory either, their candidate has gotten into a series of kerfuffles because of his tweets (including a series of offensive tweets aimed at women) and despite having voted remain, has flipped his position entirely since being selected as the candidate.

Plus, this weekend, Labour were delivering this in Stoke: 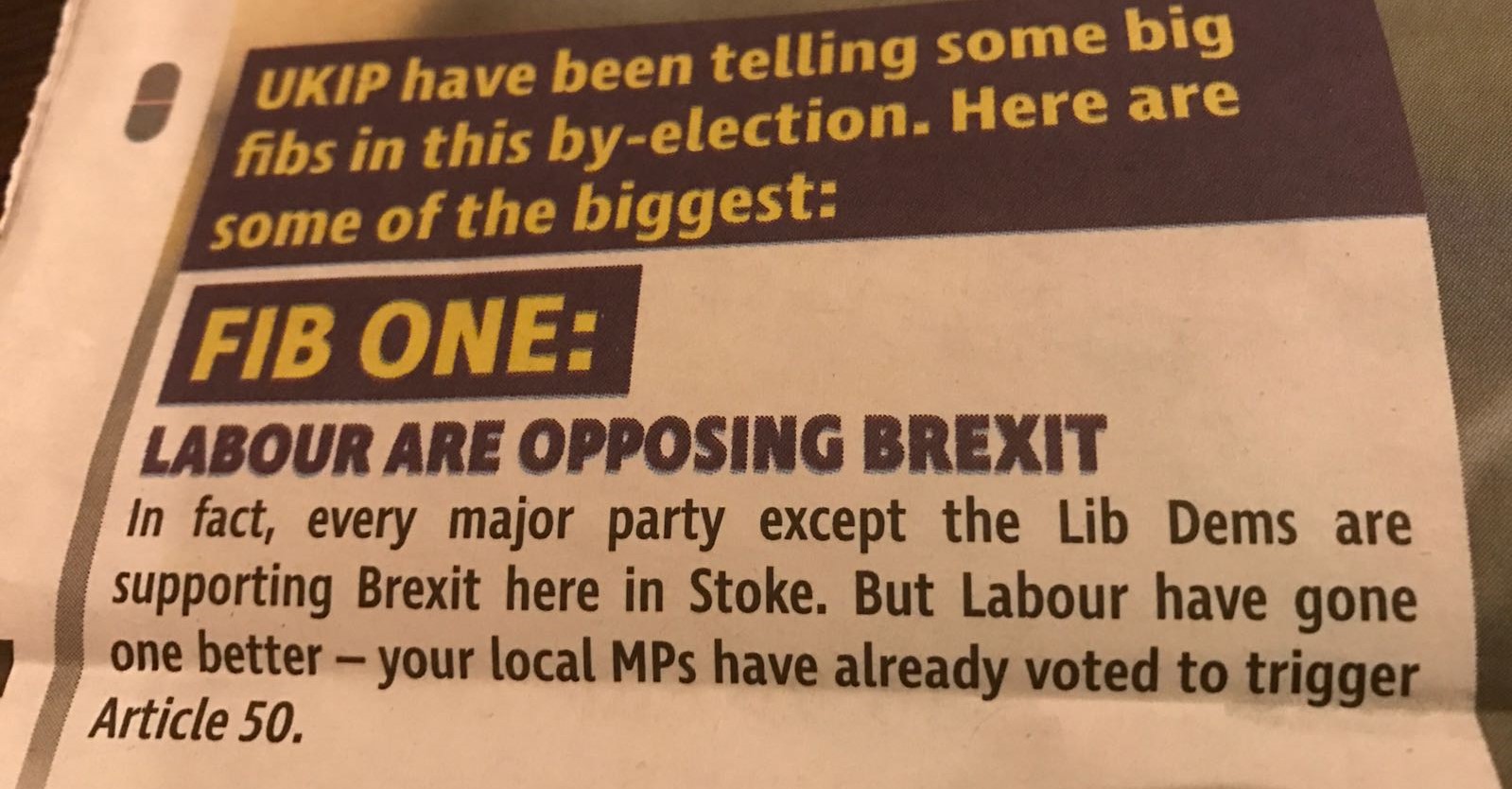 Labour are trying to out-UKIP UKIP and it's frankly awful. They aren't even trying to stand up for the progressive values they claim to represent.

Two dreadful candidates. A race to the bottom between UKIP & Labour. It's depressing stuff.

And it shows why it really matters that we're offering the voters of Stoke-on-Trent Central a positive, pro-European alternative to this awful pair.

And that's exactly what we're going to use every single one of these final 8 days to do, offer a positive alternative to the voters of Stoke - but we're going to need your help to do it. Here's how you can help:

1. Come to Stoke to campaign

There's things to do every day and we've got a big action day this weekend - if you can make it to Stoke-on-Trent, please sign up on the link below and we will be in touch with everything you need to know:

If you can’t be there in person, you can be a huge help by making canvassing calls from home. All the instructions you need to do this are here:

If you can help Zulfiqar stand up for our values by making a donation, please do you can donate here and every £1 will make a massive difference.