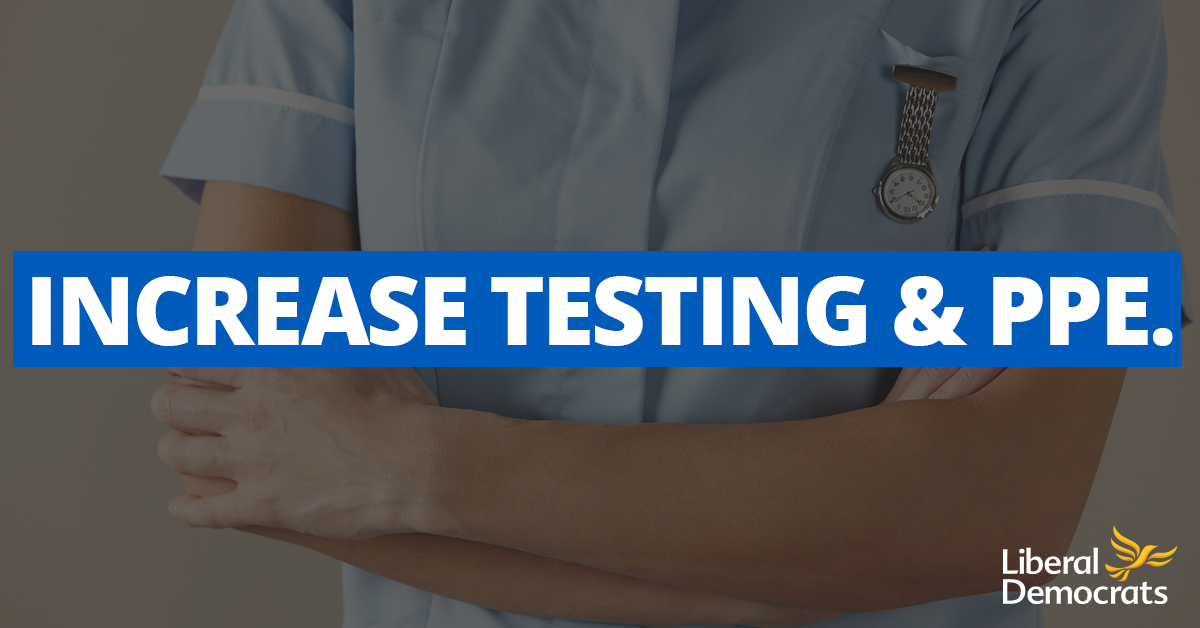 Liberal Democrat MP Tim Farron claimed a campaign victory yesterday after the Government announced it will write off over £13bn of NHS debt and he has called for investment in Covid-19 testing and PPE for NHS staff.

The announcement came after former Leader of the Liberal Democrats, Tim Farron, revealed last year through a freedom of information request that £607,404,854 worth of interest on outstanding debt was paid by NHS Trusts to the Department for Health and Social Care in the previous five years.

"It should not have taken an international pandemic crisis for this to happen but it is very good news all the same.

On top of these debts were huge interest rates that robbed our local hospitals of millions of pounds every year. The money should have been spent money on frontline services."

On top of these debts were huge interest rates that robbed our local hospitals of millions of pounds every year which we have long been pushing for the Government to axe. It shouldn't have taken a crisis for this to happen but very good news all the same. https://t.co/HLusgy7AiV

The Liberal Democrats have long been pushing for the Government to axe these draconian interest rates. They cost my local hospitals trust the equivalent of running an entire radiotherapy unit every three years.

We must now ensure funding is urgently directed towards the roll out of adequate PPE and testing for NHS and social care staff. 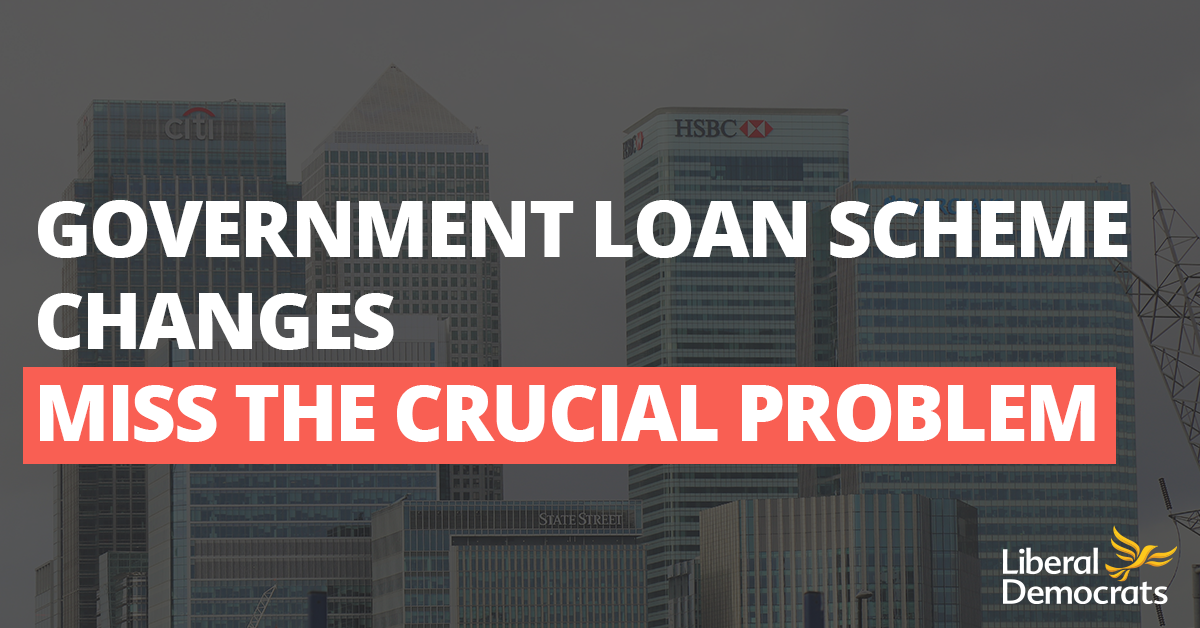 Today, Acting Leader of the Liberal Democrats Ed Davey argued that the Chancellor's latest changes to the Coronavirus Business Interruption Loans Scheme still rely too much on traditional lenders.

He also called on the Government and the British Business Bank to fast track cash to desperate businesses by opening the scheme to new lenders including the UK's growing Fin Tech industry.

"Although the Chancellor's loan scheme is well intentioned, it was badly designed from the start and the latest changes don't address the fundamental flaw in terms of the over-reliance on traditional lenders.

Despite huge handouts in the 2008 financial crisis, the big banks have shown themselves institutionally incapable of serving the needs of Britain's small and medium sized businesses, at the speed this crisis demands.

The Chancellor needs to bring in other players with the skills and technology to meet this urgent challenge.

The Chancellor's latest changes to the loan scheme fail to address the over-reliance on traditional lenders.@EdwardJDavey has urged the British Business Bank to bring in smaller, specialised lenders to help get these zero interest loans out fast & save thousands of businesses. pic.twitter.com/GnNWBCZZBc

While the Government must make clear to big banks that they are expected to offer far better terms, now is the time to turn to smaller specialised alternative lenders, including our world leading Fin Tech industry.

These smaller competitors to the larger banks must be given a chance to show what they can do, with their more modern and agile digital platforms and their can-do attitude.

That's why Ed Davey has urged the state-owned British Business Bank administering the lending scheme to bring in the smaller, specialised lenders to fill in the gaps, and help get these zero interest loans out fast to save thousands of businesses.

Having given the traditional banks unprecedented support just a decade ago, the taxpayer will now demand far better from them - and expect the Government to turn to lenders who really want to help."

Davey response to postponement of COP26 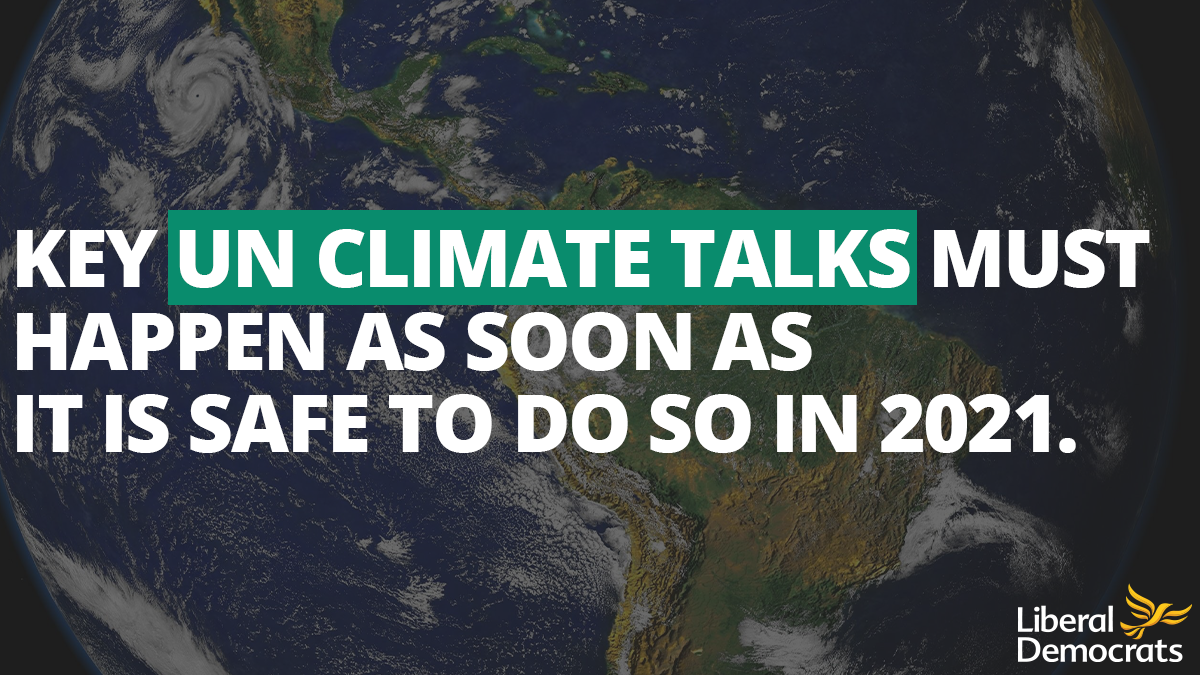 Responding to reports that COP26 in Glasgow has been postponed, former Secretary of State for Climate Change and Acting Leader of the Liberal Democrats Ed Davey said:

"Regrettably it is the right decision to postpone COP26 during the coronavirus crisis. With the virus only just beginning to hit parts of our world, and with real worries about its impact on people here at home and in the world’s poorest countries, a global meeting involving thousands of people would simply be too risky to public health.

Yet we can’t let up on efforts to battle the risk climate change poses to the world either - so it’s vital these key UN climate talks happen as soon as it’s safe to do so in 2021."

It is the right decision to postpone COP26 during the coronavirus crisis.

However it’s vital these key UN climate talks happen as soon as it’s safe to do so in 2021.https://t.co/fN8BNhArXx

The British Government as the hosts of COP26 must now work with the UN, to look at other ways to maintain momentum for climate action, that don’t impact the fight against CV19.

The Coronavirus crisis has shown that global problems need global solutions. Solving the climate emergency will take the same level of resolve and determination as we are showing during the coronavirus crisis. 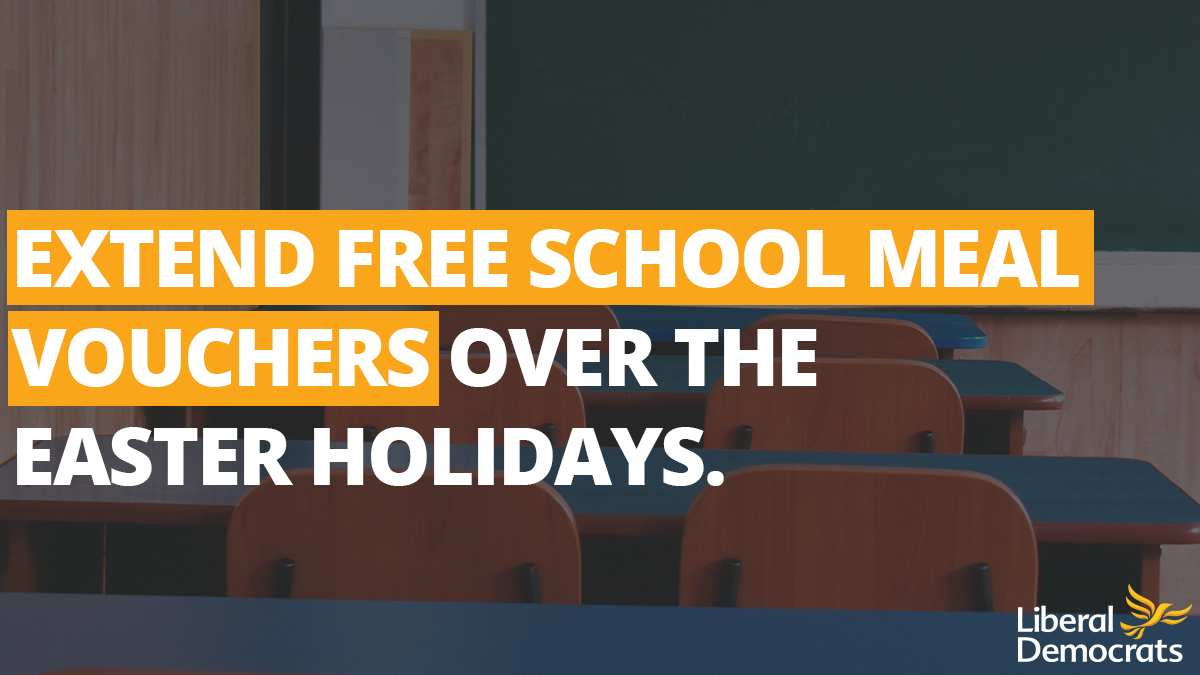 The Liberal Democrats have called on the UK Government to ensure children on free school meals will continue to receive vouchers over the Easter holidays.

The call follows confirmation from the Welsh Liberal Democrat Education Minister, Kirsty Williams, that children in Wales will also be offered free school meals during the break.

.@LaylaMoran: "I want to thank my colleague Kirsty Williams for leading the way on this in Wales. The UK Government must now urgently follow suit and ensure money is available for this to happen right across the whole of the UK." https://t.co/lbwdDdY5Nm

“Pupils on free school meals are some of the most vulnerable in our society and often rely on schools to provide their meals. With families struggling at this difficult time there is a real concern these children could go hungry.

"I want to thank my colleague Kirsty Williams for leading the way on this in Wales. The UK Government must now urgently follow suit and ensure money is available for this to happen right across the whole of the UK." 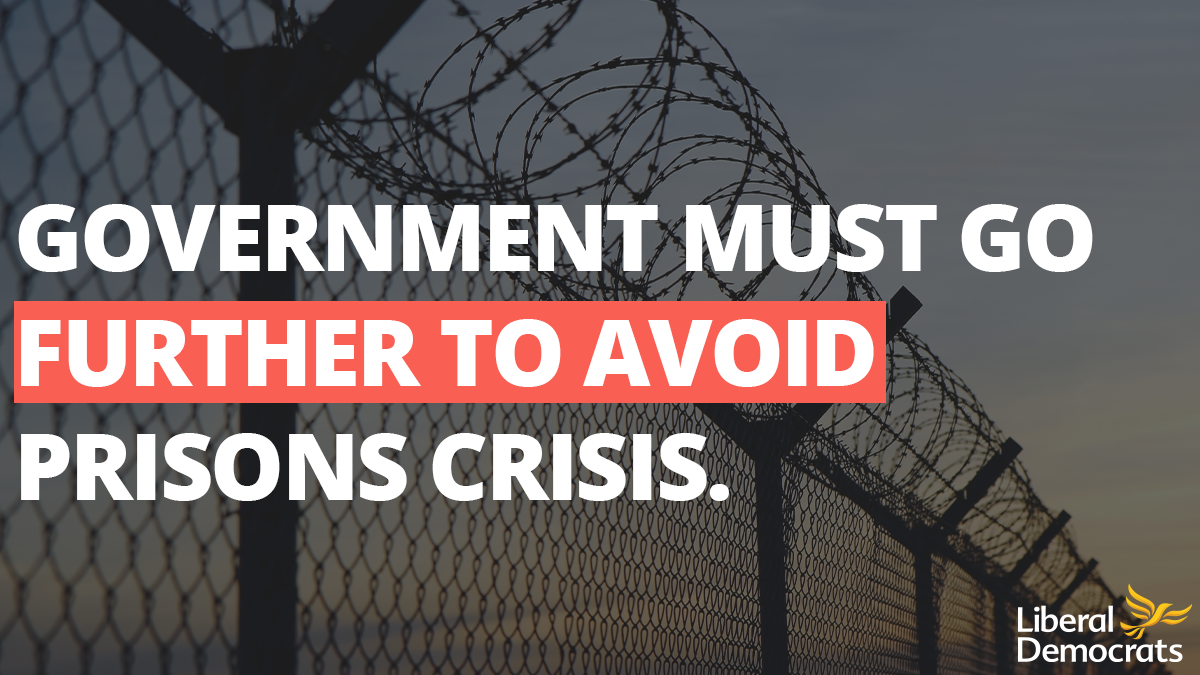 Following the announcement from the Ministry of Justice that pregnant prisoners will be temporarily released from prison, Liberal Democrat Justice Spokesperson Daisy Cooper said:

“This decision to release prisoners who are pregnant and at increased risk from coronavirus is necessary and welcome, but should have been taken much sooner.

Prisons are overcrowded and prison staff were already massively overstretched before coronavirus. Now with 20% of staff off work due to the virus and rising, we are getting close to breaking point."

The Government must go much further and faster to prevent us sleepwalking into a huge Covid crisis in our prisons.

The Government must urgently listen to prison governors and end overcrowding in prisons, including releasing prisoners serving short sentences and suspending any new short sentences.

This decision to release prisoners who are pregnant and at increased risk from coronavirus is necessary and welcome, but should have been taken much sooner.https://t.co/fWT9mXtjSX