Tim Farron, Layla Moran and Vince Cable spoke at our last rally of the EU elections in London this evening. And they were joined by a special guest - Andrew MacKinlay, former Labour MP for Thurrock.

Read their barnstorming speeches and catch up on the action here: 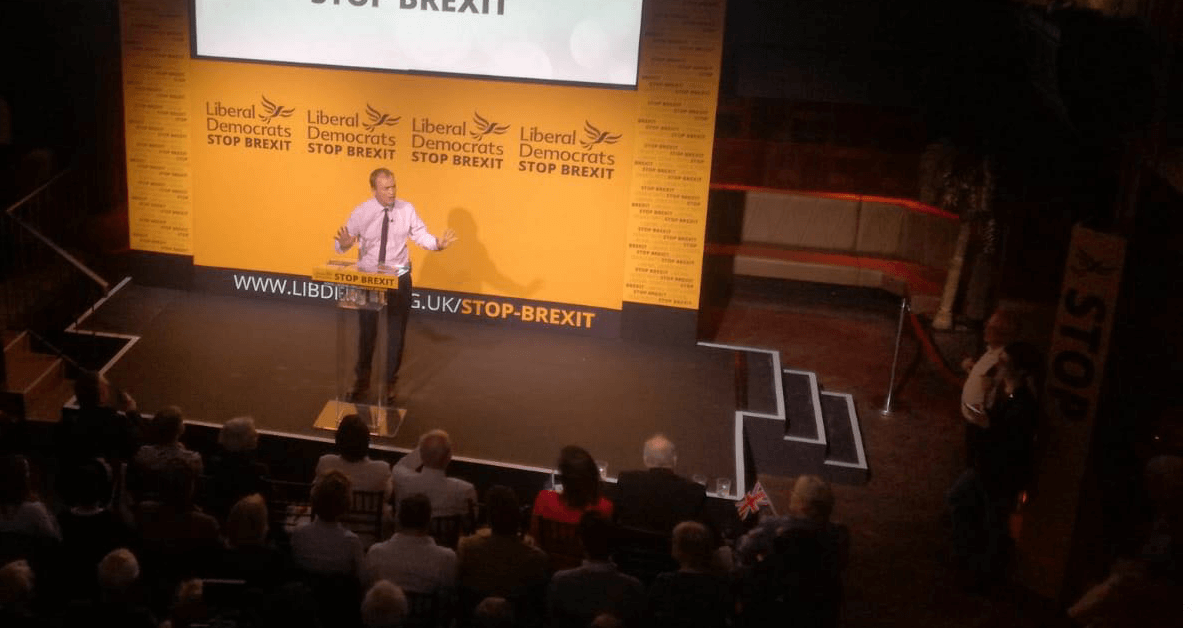 What you do in the last few hours matters massively.

Our message of Remain is matter.

Our place in the EU is synonymous with Britain being part of the biggest peace process in the world.

If we do well in the European elections, it changes everything.

In the last four years, we have rebuilt this party, growing back members, supporters, MPs, councils and councillors. We now have just 48 hours to save this country.

I am here so I can say to my children that I did everything I could to save this country.

Be a patriot. Vote Liberal Democrat.

The decisions I made and we made in June 2016 - and in the years - since mean that I can turn to my children and say I did my best for you.

But imagine how good it will feel if you can all turn to our children and say I did my best for you - and we won.

That is in touching distance in the next 48 hours

It is easy to mistake the patriot and the nationalist. A patriot loves their country. A nationalist hates their neighbour.

Be a patriot. Vote Liberal Democrat.

Across the country, we are coming across people who have never voted Lib Dem before, because of the passion of our message and the credibility of our cause.

Every time someone tweets that they are voting Labour or Tory, think how much it would take for you to not vote for the party you love.

But there are things that change.

Here is a parliamentary colleague, Andrew MacKinlay, who did just this.

After Christmas last year, I let my membership of the Labour Party lapse after 52 years, 18 of which was as an MP.

I made a similar decision when I resigned from Parliament 9 years ago, I decided to resign from frontline politics.

I was not prepared to acquiesce in silence in the face of such national self-destruction.

Against the backdrop of that vote being orchestrated, funded by people of whom we know very little.

Month after month, I waited with bated breath for the official opposition to demand a People' Vote.

But we waited in vain.

What is Jeremy Corbyn's problem with a People's Vote?

Truly remarkable. The constant Gardiner to the Tories: "We are in there trying to bail you guys out." pic.twitter.com/rONOXIjFjs

It seems to me common sense.

We make decisions all the time and then change our minds.

We instruct surveyors and architects to review our decision after we put an offer on buying a house. If they come back and find the structure isn't sound and the attic is rotting, we have the option to back out.

The British people are entitled to think again.

I'm tired of waking up and listening to Barry Gardiner and Emily Thornberry speaking on Radio 4, using the words 'let me be clear' and then never be clear.

What is Jeremy Corbyn's problem with a People's Vote?

It's hardly surprising; they are led and appointed by Jeremy Corbyn, who just a few hours after the referendum result was demanding that the Article 50 letter was sent, showing so much ignorance of what was at stake.

Even up to last Sunday morning, I was hoping for the Labour party to back a People's Vote.

But Labour have run out of time.

Proud Europeans, it is now make your mind up time.

The position of the Labour Party is incoherent, inconsistent.

The only vehicle to support this Thursday are the Lib Dems.

I invite those pro-European Labour voters to reflect with me - there is now an opportunity to strike out and to get that realignment of the centre-left.

It is a chance to stop apologising for Europe. I believe in Europe. I don't want to apologise for Europe. I want to proclaim it as a force for good, for the arts, for employment rights, for conflict minimisation and conflict reconciliation, including in our own neighbourhood across the Irish Sea. 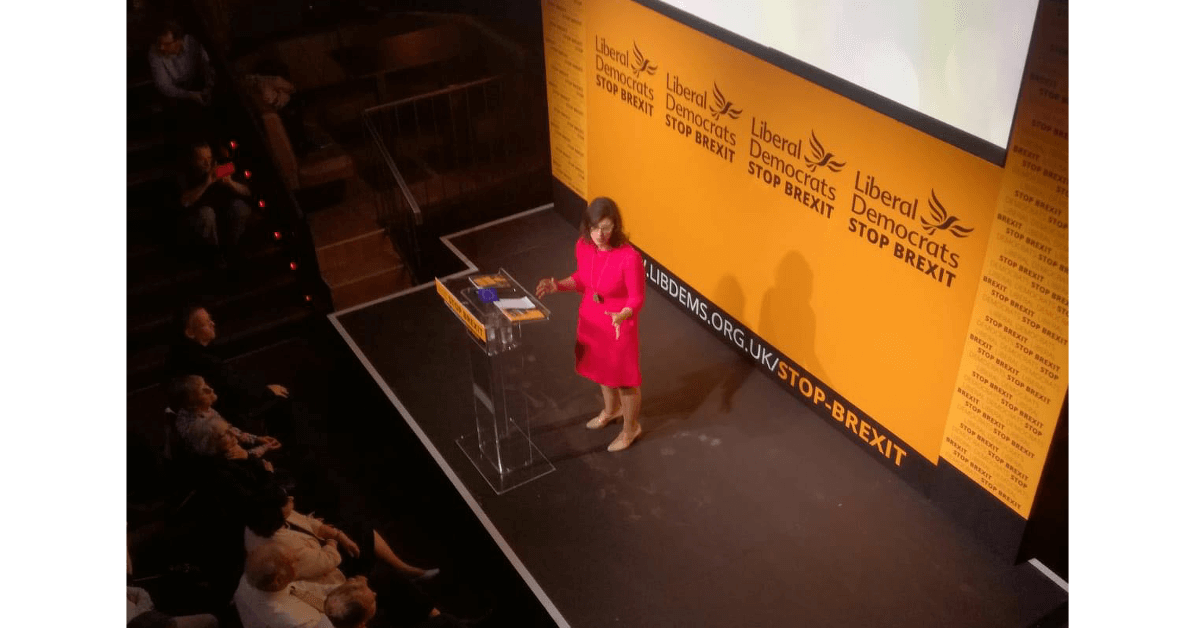 This time two years ago, when the snap election was called, I was utterly convinced I was not going to be elected.

I’d decided I was going to step back from politics.

I’d gotten a job offer as a deputy head, and I told my to-be boss that “if you want to make some money, bet against me – there is no way in hell I am going to overturn a ten thousand Conservative majority in one go."

People now think that my constituency, Oxford West and Abingdon is a haven of pro-European voters. It’s really not though. We have dyed-in-the-wool leavers – like much of the country.

It was where Tim Farron met a Leaver on the campaign trail and they discussed their differences. They ended up hugging it out.
Because we’re all exhausted by Brexit. We all want to just make it stop.

Because us Liberal Democrats - we've been there from the beginning.

We were a lone voice in June 2016, in the aftermath of the referendum result, when we called for a People’s Vote. We didn’t do it because it was popular. We did it to stay true to our pro-European values.

We were a lone voice in June 2016, in the aftermath of the referendum result, when we called for a People’s Vote. We didn’t do it because it was popular. We did it to stay true to our pro-European values.

And under her stewardship, the country has become more and more divided.

Today the Prime Minister said in a press conference, 'look across the world at the health of Liberal Democrat politics'

If you look, you will see the best local election results we've ever had – in Leave and Remain areas, in the North and South of the country, among men and women, young and old – every type of voter is saying to the two main parties, you are a disgrace.
The Liberal Democrats are flying high.

In Oxford West and Abingdon, we had LOADS of paper candidates that were accidentally elected a few weeks ago.

And if I had that conversation with the head teacher a few weeks ago, I wouldn't have been able to say don’t bet against me.

I would bank on the Lib Dems to come through right now.

To the people waving EU flags tonight – I love that flag. I grew up the daughter of an EU Commission official. My parents live in Brussels, my grandmother is in Greece.

I am actively seeking my Greek passport because of Brexit. I don't want to have to.

Because I am European.

We are all European. We deserve our place in the EU.

We have 48 more hours. Go out and campaign, in the European elections – not just for your future but for our children’s future and our country’s future. 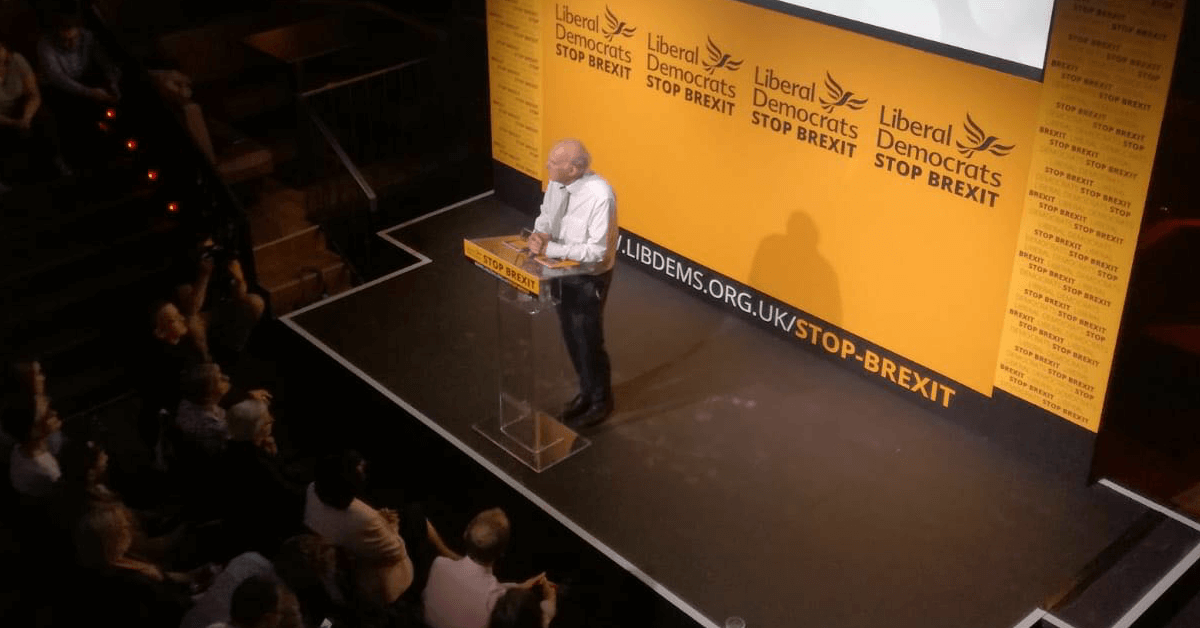 Thank you to everyone that has been part of our European election campaign and our campaign to secure a People's Vote.

I want to take tonight to first thank Tim Farron. He was the person who made the brave choice three years ago, in the aftermath of the referendum result, to commit our party to a People's Vote.

Since then, we've been the party of remain, the party fighting to stop Brexit.

Our European election campaign has been a journey, aptly described by the big campaign rallies we've had.

The first, when we launched our election campaign and before the local elections results had come in, the press asked me how our party would be anything other than completely humiliated by Change UK.

At our manifesto launch, the press were slightly nicer, after our spectacular local election results.

Although they struggled with our slogan - Bollocks to Brexit.

But I've checked and it has a long and distinguished history. It means nonsense.

I've been travelling around the country, hearing from voters. I've been mobbed by a hen party in Malaga, nurses in Liverpool, commuters in Birmingham.

Around the country, people are with us.

The stop Brexit message has resonated with millions.

And it's clear why.

Today, the heart of the British steel industry, British Steel is being put into administration, because they have lost their market in Europe.

In Birmingham, they are very worried about Jaguar Land Rover.

On Monday, the report on the health service came out. It is being hollowed out - there is a desperate shortage and the nurses we brought in from Europe are going home - because they feel they are not wanted any more.

Brexit is doing huge damage to our health service - that people thought they were saving.

It is extraordinarily sad.

There are also many positive reasons we want to get our wonderful MEP candidates elected to Brussels.

Around the country, people are with us.

There is an international climate emergency. If you try and tackle climate change at a national level it won't work. You have to do it from a position of strength to challenge China and the other large polluters.

We stand together as a liberal movement against the appalling trend of populism.

We also want to work with our colleagues in the European Parliament and make Europe safe and secure in a dangerous world of Trump and Putin, Facebook and Google. Now, the EU can exercise serious discipline, we need to stand up to bullying. The EU can do this when we can't.

I am then debating Trump's little helper - Nigel Farage.

There are some important things you can do.

Tomorrow we are campaigning in Islington - we are looking for the last few Labour voters in London.

After that, I am then debating Donald's little helper - Nigel Farage.

Then we are campaigning. Flat out. Non-stop. For 48 more hours. Liberal Democrats are good at campaigning to the last minute. And you can be part of it - and help stop Brexit.