The Federal International Relations Committee (FIRC) manages the Party’s relationships with sister parties internationally and oversees the organisation and provision of training for sister parties outside the UK.

In addition, the FIRC co-ordinates the work of internationally-minded organisations within the framework of the Party and advises the Party on international policy where appropriate.

The Chair of the FIRC chairs its meetings and acts as the main point of contact with sister parties, alongside the International Office. The Chair is elected by the whole committee from among the directly elected members of the committee. The committee members meet four times a year and ensures that the Party is represented with attending Liberal International (LI) and Alliance of Liberal and Democrats in Europe (ALDE) Party congresses and conferences where possible, at their own expense. Furthermore, the Committee assists the Federal Board in its monitoring of Liberal Democrats European Group (LDEG) and Liberal International British Group (LIBG).

The Committee consist of 25 members and is chaired by Phil Bennion.

Hannah Bettsworth - A European Policy and Research Officer and former International Officer and Scottish Co-Chair of the Young Liberals.

Ruth Coleman-Taylor - A Councillor of 16 years and a former teacher.

David Chalmers (Chair, LDEG – Liberal Democrat European Group) - A former Commercial Operations Director with the Economist Group in Asia Pacific and a co-founder of the Kaleidoscope Trust, a leading LGBTQ+ rights group, David is currently the elected Mayor of Northam, a Governor of the Petroc College and the Chair of the Charity Sunshine.

Mark Valladares - The Chair of Creeting St Peter Parish Council in Suffolk's Gipping Valley. He has held a variety of positions across the party, is a former International officer of the Young Liberals and served for eight years as a member of the ALDE Party's Financial Advisory Committee.

Paul Reynolds - A member of the Policy Working Groups on Defence, Trident, UK Economy and International, Paul is an independent adviser on international relations and economics. He has conducted in-country advisory work in more than 70 countries.

Joyce Onstad (Federal Board) - An elected ALDE representative to, and former Vice Chair of, Federal Board, with a background in international development.

John Kelly (English Party rep.) - Vice Chair of LD Friends of Palestine and Warwick District Local Party, he is a member of the West Midlands Regional Executive and a Director of Mira Kelly, a fundraising consultancy.

Baroness Jenny Randerson (Welsh Party rep.) - A former Cardiff Councillor, lecturer and Parliamentary Undersecretary of State in the Wales Office, she is Chancellor of Cardiff University.

Sir Graham Watson (Scottish Party rep.) - A member of the Scotland, and the Western Counties Region, Executive and, he is a former MEP and current EU Counsel to H.M Government of Gibraltar. 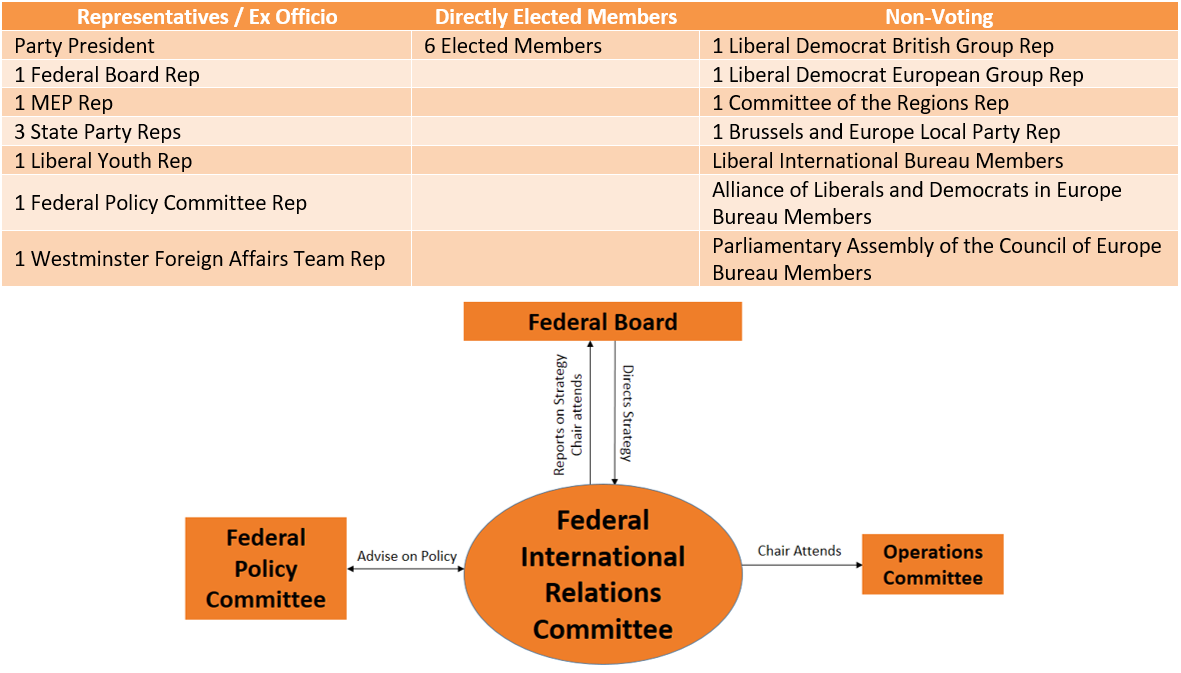