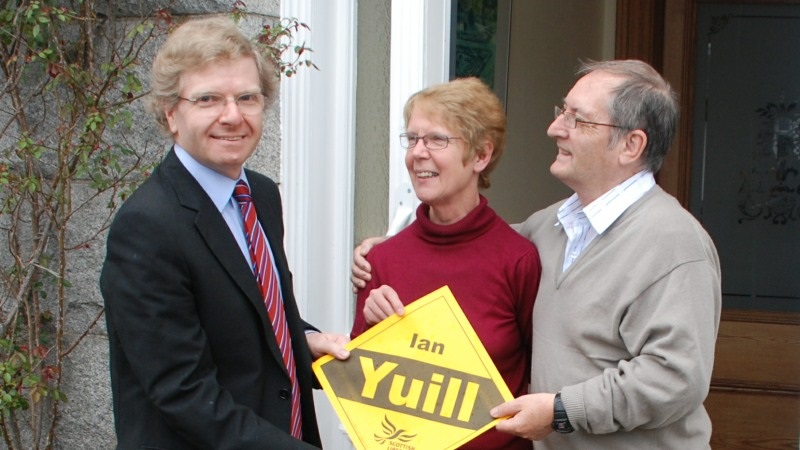 Ian Yuill is Scottish Liberal Democrat councillor for the Mannofield, Airyhall, Braeside, Broomhill, Garthdee, Kaimhill and Ruthrieston areas of Aberdeen. He was most recently re-elected on 4th May 2017.

Ian was brought up and continues to live in Aberdeen South and has been a councillor in the constituency for over 25 years.
Ian is Leader of the Liberal Democrats on Aberdeen City Council and was Deputy Leader of the Council between 2003 and 2007. Ian has served as Convener of Aberdeen City Council’s Environment and Infrastructure Committee (2003-2007) and Finance and Resources Committee (2012). Ian was Chair of NESTRANS – the statutory transport partnership for Aberdeen City and Shire – from 2011 to 2012.

Ian is committed to working to keep Scotland in the UK and the UK in the EU. He believes people are best served by removing borders – not creating new ones. Ian will work to stop Brexit which would hit Aberdeen’s economy badly. Ian is leading the campaign to axe the unfair Garden Tax on recycling garden waste introduced by Conservative-Labour controlled Aberdeen City Council.

AS MP for Aberdeen South Ian Yuill will work for a green transformation of the Aberdeen, Scottish and UK economies, for improved transport links for Aberdeen and for improved health care standards and educational opportunities.
A business studies graduate of the Robert Gordon Institute of Technology in Aberdeen, Ian has experience of working in both the private and third sectors. Ian was formerly a member of the senior management team of one of Scotland’s largest charities.
Ian is a Chartered Marketer and Member of the Chartered Institute of Marketing. He is a Fellow of the Royal Society for the encouragement of Arts, Manufactures and Commerce (RSA). Ian is a Common Purpose ‘graduate’. Ian is a governor of Robert Gordon’s College.