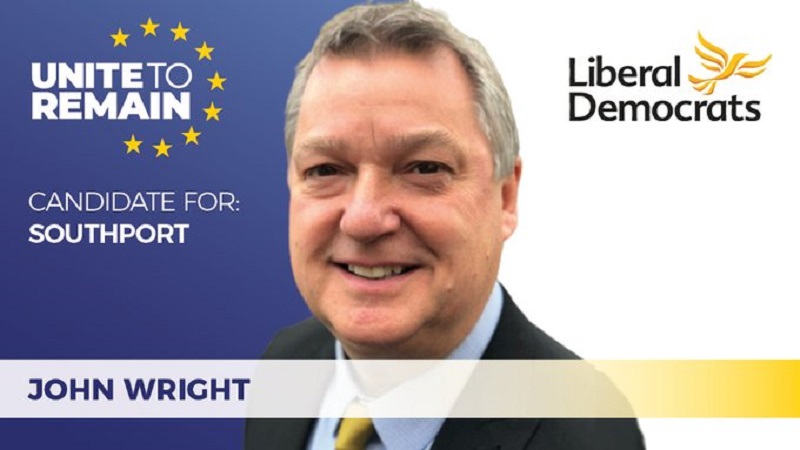 John Wright is a former teacher and college Principal who has spent his life, professionally and politically, trying to make things better for people. John's parents were from steel working and coal mining communities, who both became teachers after the war, in which John's dad served as a navigator on Lancaster bombers, while his mum gave up her education to work on the bomber production line at AV Roe in Manchester. “They remain my inspiration to this day”, says John.

John was born and brought up in Preston, but now counts Southport as his hometown. He first joined the Liberals as a student, is a former councillor, and has been campaigning with Southport Lib Dems since 2010.His local priorities, he says, are to safeguard the future of Southport Hospital, to help revitalise Southport town centre, and to fight for Southport to get its own council. John also says that a major priority for him if elected as MP would be to work to ensure that the most disadvantaged and deprived people in Southport get a better deal.

“After years of austerity, we need to rebuild public services”, says John. “We need major investment in our NHS and GP services, in social care, schools, and police, and in the welfare system”. “We also need to take urgent action to address the climate emergency, which is the biggest issue facing us and our planet”.

Campaigning tirelessly for Britain to remain in the EU, John says all of these things will be much harder if Britain leaves, and becomes poorer and weaker. “The British people must have the final say on any Brexit deal in a democratic vote, with the right to Remain if they so choose”, he says. John is married to Lorraine and has four children, two grandchildren, and two dogs!