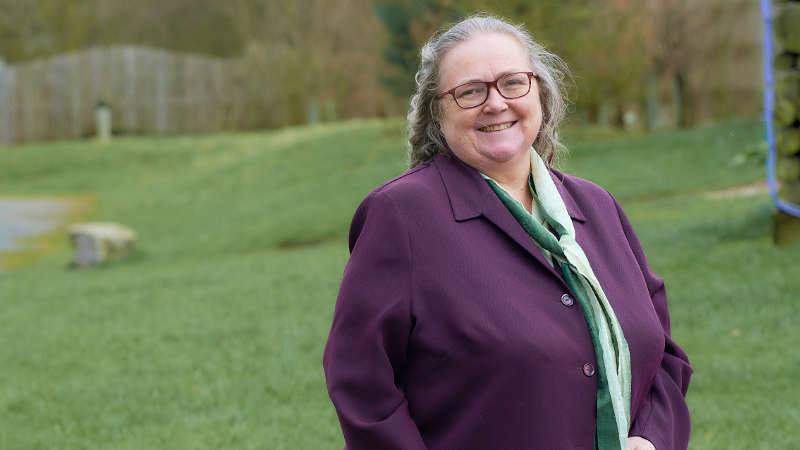 Lorraine was born in Nottingham and grew up in Derbyshire where she was one of the first pupils to study for O and A Levels at Pingle School in Swadlincote and went on to obtain a BA at Hatfield Polytechnic in Hertfordshire.

During her 30 year Career at BT she worked in various IT, Project Management and Training roles in London, Hertfordshire, and South Derbyshire. Since leaving BT Lorraine has been studying & has worked as a volunteer for Barnardo's & a Trustee & Volunteer for South Derbyshire Mental Health Association.

Having suffered from anxiety and depression after a traumatic accident, Lorraine now has a particular interest in mental health. she became a Time to Change Champion in order to raise awareness and to help destigmatise mental Illness. She is a Dementia Friends Champion promoting awareness and helping to create Dementia friendly communities.

Lorraine is passionate about promoting Fair Trade and sells Fair Trade goods to raise funds for local churches and charities. She has also served on her Parochial Church Council & Deanery Synod as Secretary.

In 2015 & 2017 Lorraine stood as the Liberal Democrats’Parliamentary Candidate for South Derbyshire and has stood as Candidate for Linton Division/Ward in council elections since 2011. She became a Parish Councillor in Castle Gresley in 2019.

Previously Secretary to Derbyshire Liberal Democrats, she was also a member of the Policy working group for Rural Communities. Lorraine was instrumental in forming the new South Derbyshire Branch of Derby City Liberal Democrats & was Interim Chairperson.

Lorraine wants more affordable and social housing & improvements to schools, healthcare and other local facilities to support local community needs. She wishes to encourage sustainable development and increased use of renewable energy sources across South Derbyshire, protecting our environment and creating more green jobs. She wants to support local businesses & encourage creation of Apprenticeships and discourage widespread use of zero hours contracts.