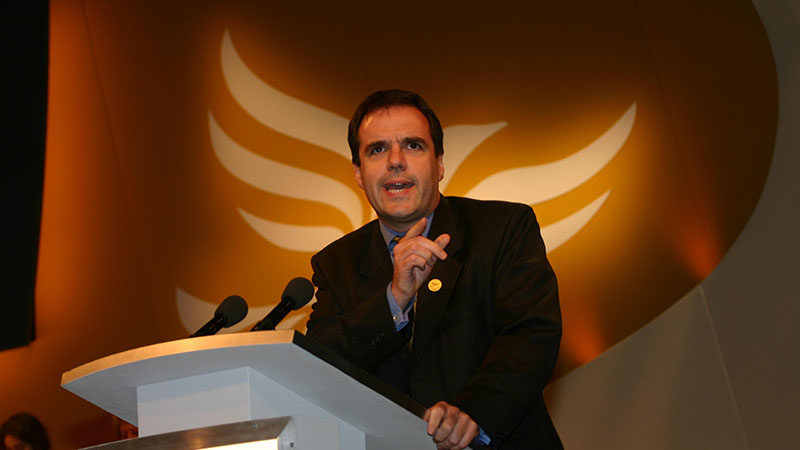 Matthew Owen John Taylor was born in London on 3 January 1963 and adopted by the late Ken Taylor, a television author, and his wife Jill.  Matthew was involved in his first election in 1979 at the age of 16 (for the Liberals and North Cornwall), and joined the Cornwall anti-nuclear alliance aged 17, campaigning against a proposed nuclear power station near St Ives. He was educated in Truro and London before winning a scholarship to Lady Margaret Hall at Oxford University. He graduated with a BA (Hons) in Politics, Philosophy and Economics in 1985 and was president of the Oxford University Students' Union.

In 1986 Matthew was appointed as an economic policy researcher by the Liberal Party, and assigned to the then Truro MP David Penhaligon who was Treasury Spokesman. After Penhaligon died in a car crash just before Christmas in 1986, Matthew was selected as the Liberal candidate and won the March 1987 by-election. At the age of 24 he was the youngest member of the House of Commons, and he retained this distinction for a record 10 years until 1997.

Throughout his 23 years as a Liberal Democrat MP, Matthew took a strong interest in policy development, communications and political strategy. According to Duncan Brack's Dictionary of Liberal Biography (pub 1998), "In his various roles within the parliamentary party, he has taken these three elements equally seriously and treated them as an integrated whole. As a result, the party has developed some of its most important policy and campaigning themes."

Matthew's achievements included devising the re-launch of the party as the Liberal Democrats in 1989. He led the Party’s campaign against the poll tax (developing the Local Income tax alternative), and then brought together a comprehensive and distinctive education policy, which included the pledge to put a penny on income tax - the focus of the party's campaigning for the next five years. He co-wrote the 2001 General Election manifesto and wrote the 2005 General Election manifesto. He was chair of the party’s campaigns and communications team for many years in the late 1980's and early 1990's. After leading Charles Kennedy's successful party leadership campaign he became Liberal Democrat Shadow Chancellor, after which he was appointed chair of the parliamentary party, again assuming responsibility for the Liberal Democrats' communications and policy teams. Matthew also led for the Liberal Democrats on key portfolios including Local Government, Education, Environment (winning the Green Ribbon Award as Britain's 'most effective environmental MP' in 1998, and introducing the principle that green taxes meant ‘we’ll tax you differently, but we won’t tax you more’).

In 2007 Matthew was appointed by the then Prime Minister as Special Advisor on Sustainable Rural Communities (Land Use & Planning), culminating in the publication of the Taylor Review,Living Working Countryside (June 2008). Of his 48 recommendations, 46 were accepted for implementation by the Labour government.

Matthew had announced in 2007 that he would be standing down at the next General Election after more than 20 years as a Cornish MP, following the birth of his two boys (Arthur and Jacob), on the principle that he should not be away in London throughout their school days. A year later his son Arthur was diagnosed with cancer, the treatment keeping Matthew in London near Great Ormond street for most of his last year as a Cornish MP. He later said this would have precluded him from re-standing for Truro, even had he not already announced his retirement.

Matthew continues to pursue his interest in sustainable communities, housing, the environment and strategic communications, and has developed a portfolio of professional roles reflecting this expertise (see below). He also continues to advise the government on housing and planning issues.
In 2009 Matthew founded the Rural Coalition (a coalition of 14 national organisations concerned about rural development issues. It became – and still is - a key DEFRA/Government consultee to assist development of Government policy. During his chairmanship, he wrote  a major report to the then new coalition government, The Rural Challenge (August 2010), making more than 40 recommendations on delivering the ‘Big Society’ in rural communities on behalf of six major national organisations. Matthew was chair until 2012 when he stood down to pursue other interests.

In 2012 he was asked by the present Government to lead an independent review of the whole of the Government’s planning practice guidance (some 238 documents comprising 7000 pages of detailed planning guidance dating back in some cases decades)). His recommendations, published at the end of 2012 were accepted, leading to the creation of a completely new, web based guidance suite replacing all of the older material, bringing it up to date an in line with the National Planning Policy Framework, less than 10% of the length and easily accessible by anyone with an interest in planning. Designed to be easily kept up to date, the new guidance suite went on-line in ‘beta’ in August 2013 for comment, and will be finalised and come into force shortly.

Matthew also works as a specialist consultant, through Taylor & Garner Ltd. Clients include Barton Willmore, Dunsfold Park Ltd and Cornish Concrete Products Ltd.
Matthew was made a life peer in July 2010. He lives in Cornwall with his wife, Vicky Garner, and their three young sons.