Press releases are used to communicate content for stories to the media in your area. It's important to not make your press release too long - you want to keep it punchy and readable. It helps to assume that the reader is somebody who is flicking through their emails, not reading each one in depth.

Don't send your press release as a file, keep it in the body of your email. Every step that someone has to take to get to the story is an extra barrier to them covering it in their output.

As an outline, here is the press release format that the LDHQ press office uses: 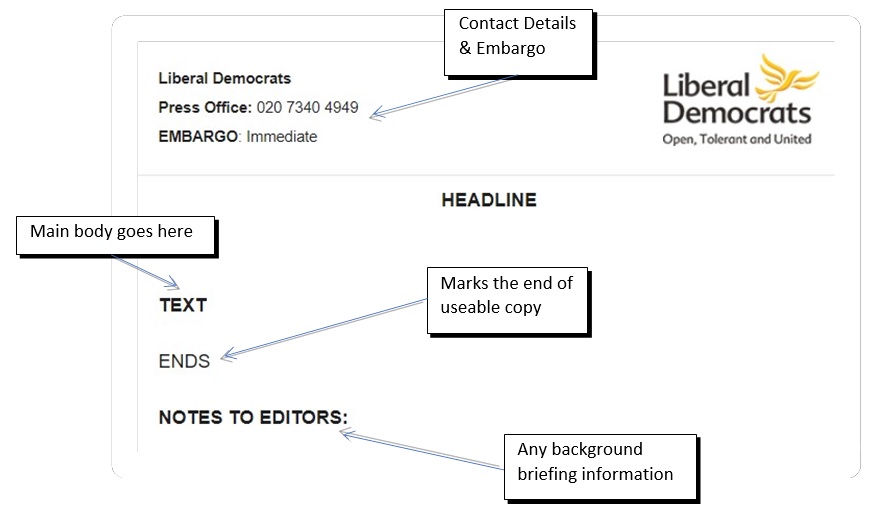 Like Focus leaflets, always assume that no-one is going to read what you send them, and that they will only skim what stands out before they move on to something else! You need to summarise what you are saying in the shortest, punchiest way so that a journalist skimming their emails will be stopped and intrigued to read more.

A commonly used metaphor in journalism is the inverted pyramid. The basic premise of this is that your most newsworthy items need to appear at the top of the story/press release as the editors will cut copy from the bottom up. This means your key information should be in the first line of the press release. The Who? What? When?, and then the punchiest part of the quote. 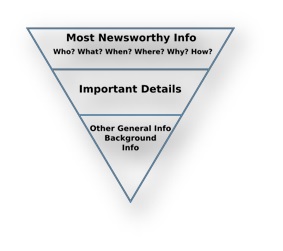 It's good practice to work to the idea that you have, at most, three sentences that a journalist might pick up. The third and final sentence should usually be key message script - a line that we repeat regularly in different press releases - such as "Only the Liberal Democrats offer an exit from Brexit." With any luck this will get into the article, but if not then it's still a good thing to keep the press reminded of our key campaigning aims and messages to voters.

Remember, quotes are there to provide insight, not information or statistics. If you find yourself quoting a figure or a statistic, consider removing this out of the quote to either the intro or the notes section at the end of the press release.

Making use of an embargo allows you to feed information to the press ahead of time, allowing them to have the story ready to go, and giving you some control over the time when the story lands in the public domain. This is useful in such circumstances as a report is published and copies of the report are distributed ahead of time, because it enables a newspaper to write their article about a report, but not publish it until the report is freely available. Another example could be a speech, you may want the press to have copies of the words ahead of time so that they can prepare a story, to be published immediately after a speech is delivered.

In terms of formatting, embargoes should appear at the top of your press release as:

So an embargo for 2pm on Thursday 1st March would read:

Make sure you include an imprint in your press release. This should read:

'Published and promoted by [NAME] on behalf of the Liberal Democrats, [ADDRESS].

Attaching photos is a massive boost to local press, who are typically very understaffed, need to fill pages and may not have the resources to send out photographers. It is worth spending the time to get comfortable with taking well framed, in focus, campaign photos so that you can get your images in the local media. Photographs are often far more eye-catching than just blocks of text, and so they will increase the number of people who read stories about your activity.

When you have a good story, send the press release, but then follow this up by phoning the reporter or editor. Talk them through it and explain why it is important and relevant. This makes a huge difference and helps to build personal relationships with the press in your area, which are vital.

You can download an editable press release template here.