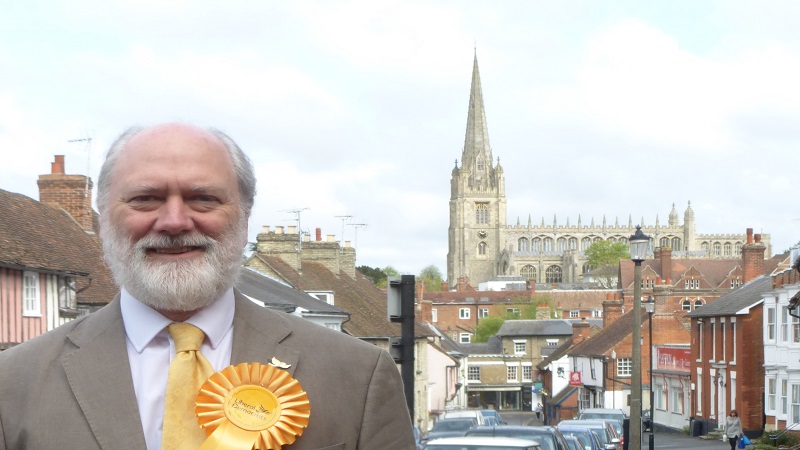 Mike is a committed European and has led the local campaign to give the people the final say on the Brexit deal, with the option to remain in the European Union.

Mike has been running his own architectural practice for over twenty years, with offices in Saffron Walden and projects all over north-west Essex. He has practical experience of the building industry, having started out working for a local builders’ merchant. He then went back to university as a mature student and qualified as an architect in 1995

Mike was first elected as a Liberal Democrat in 1987 and has served as a Town and District Councillor. He has been Chairman of Uttlesford District Council, and Mayor of Saffron Walden (twice). As Chairman of the Housing Committee at Uttlesford District Council, he brought back the policy of building Council houses. On Saffron Walden Town Council Mike succeeded in getting unanimous cross-party support to pass the Climate Emergency motion he introduced. He also initiated the policy of providing drinking water fountains in order to cut single-use plastic waste.

Mike believes in a fair society. He has campaigned to keep Saffron Walden Library fully funded and staffed; fought to keep local NHS services; and worked hard over many years to promote youth services in the area.

His concerns about the implications of a hard Brexit extend beyond the usual issues – the threat to our economy, the problems of the Irish border and the effect on the Union, the need for free movement of labour, and protecting the rights of local residents who are EU citizens. He has strong family links with Germany and grew up in the shadow of two world wars. He knows that the deal we have now as a member of the EU is the only one worth having.