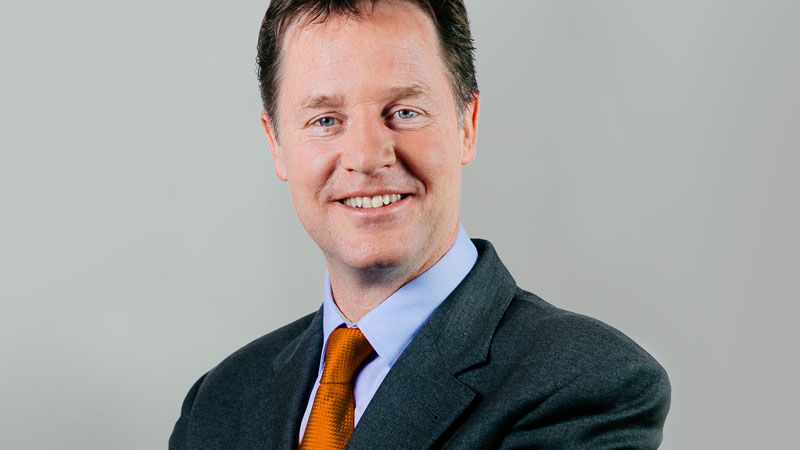 Nick Clegg grew up in Buckinghamshire with his two brothers and sister. His mother is Dutch and his father is half Russian, which influenced Nick's internationalist outlook and linguistic ability – he speaks French, German, Spanish and Dutch.

Nick studied Social Anthropology at Cambridge and afterwards continued his postgraduate studies at the University of Minnesota and the College of Europe in Bruges – where his met his wife, Miriam, with whom he now has three sons. Nick then spent some time in New York, working as a trainee journalist with Christopher Hitchens, as a consultant in London, and in Budapest writing about economic reform having won a prize from the Financial Times. Later Nick moved to Brussels where he worked for five years for the European Commission. His job included managing aid projects in Central Asia following the collapse of communism and acting as a trade negotiator with China and Russia as a senior member of Leon Brittan’s office, then Vice President of the EC.

In 1999 Nick was elected Member of the European Parliament for the East Midlands - the first liberal Parliamentarian in the whole region since the 1930s. As an MEP, he co-founded the Campaign for Parliamentary Reform, which led calls for reforms to expenses, transparency and accountability in the European Parliament. He was also the Trade and Industry Spokesman for the Liberal group of MEPs and piloted a radical new law breaking up telecoms monopolies.

Nick lectured part-time at Sheffield and Cambridge Universities before being elected as Member of Parliament for Sheffield Hallam in 2005.

He became Europe spokesman in Charles Kennedy’s shadow cabinet, acting as deputy to Menzies (Ming) Campbell. When Ming won the 2006 leadership election, he became Shadow Home Secretary. In this position, Nick led the Liberal Democrats’ defence of civil liberties, proposing a Freedom Bill to repeal unnecessary and illiberal legislation, campaigned against ID Cards and the retention of innocent people’s DNA, and argued against excessive counter-terrorism legislation.

Nick was elected leader of the Liberal Democrats in December 2007. Following the election in 2010, Nick took the party into government as part of the first Coalition in the UK since the Second World War, where he put Liberal Democrat policies into practice for the first time – the £800 income tax cut, the £2.5b pupil premium, legislating for gay marriage, introducing shared parental leave, the list goes on and on.

Nick stood down as leader in 2015, after which Tim Farron was elected.