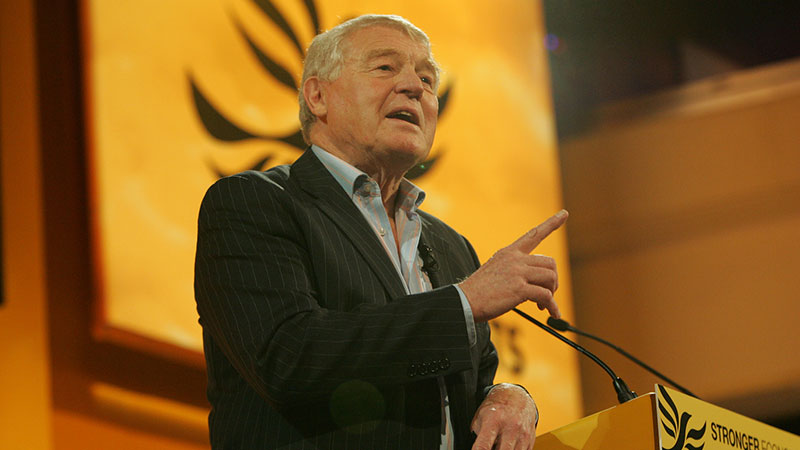 Paddy Ashdown was born in New Delhi on 27 February 1941, the eldest of 7 children. When he was 4 years old, his family returned to Britain to buy a farm in Ulster. Between 1959 and 1972 he served as a Royal Marines Officer and saw active service as a Commando Officer in Borneo and the Persian Gulf. After Special Forces Training in England in 1965, he commanded a Special Boat Section in the Far East. He went to Hong Kong in 1967 to undertake a full-time course in Chinese, returning to England in 1970. He was then given command of a Commando Company in Belfast.

In 1972 Paddy left the Royal Marines and joined the Foreign Office. He was posted to the British Mission to the United Nations in Geneva where he was responsible for Britain's relations with a number of United Nations organisations and took part in the negotiation of several international treaties and agreements between 1974 and 1976. He was also involved in some aspects of the European Security Conference (the Helsinki Conference).

After leaving the Foreign Office Paddy worked in local industry in the Yeovil area in South-West England between 1976 and 1981, firstly with the Westlands Group (Normalair Garrett) and then with Morlands' Yeovil-based subsidiary called Tescan. In 1981, Paddy went to work as a Youth Worker with the Dorset County Council Youth Service, where he was responsible for initiatives to help the young unemployed.

He stood as the Liberal Parliamentary candidate for the Yeovil constituency in 1979 and raised the Liberal vote there to its highest ever level. Shortly after entering Parliament in the 1983 General Elections, Paddy was appointed as the Liberal spokesman on Trade and Industry Affairs within the Liberal/SDP Alliance team at the House of Commons. He became Education spokesman in January 1987. He was elected Leader of the Liberal Democrats in July 1988 and was appointed as a Privy Councillor on 1 January 1989. In the 1997 General Election he further increased his majority in his Yeovil constituency to over 11,000. Paddy stood down as the leader of the Liberal Democrats in 1999 and retired from the Commons in 2001. He was made a Knight Commander of the Most Excellent Order of the British Empire in 2000 and a peer in 2001. Lord Ashdown was awarded the GCMG in the 2006 New Year?s Honours List, for his work in Bosnia and Herzegovina.

He is married to Jane and they have two children and three grandchildren.

Lord Ashdown is the author of nine books: Citizen's Britain; Beyond Westminster; Vol I and II of his published diaries; Swords and Ploughshares; A Fortunate Life; A Brilliant Little Operation; The Cruel Victory and his latest book A Game of Spies.

Keep an eye out for book number 10 from Paddy, a powerful narrative which tells the untold story of those opposing Hitler from 1934-1945. A German Tragedy will be released on 4 October.