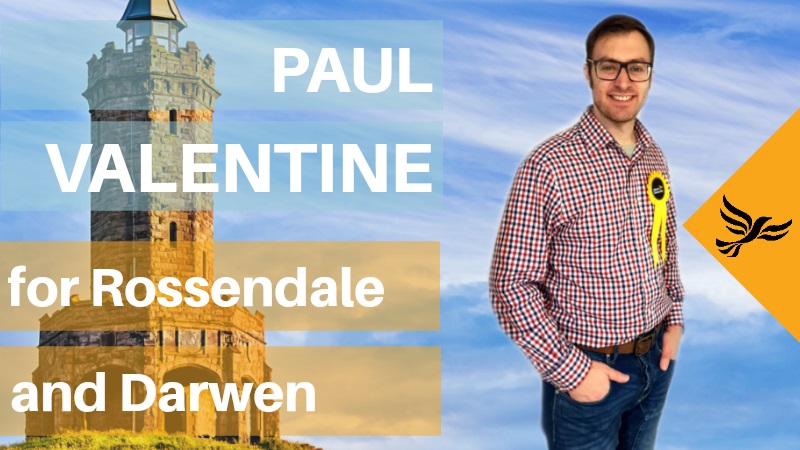 Paul Valentine is an experienced local campaigner and has been a member of the Liberal Democrats since 1996. Originally from Preston, Paul has lived and worked throughout the North West and currently lives in Leyland with his family.

Paul is a manager in a national firm of Business Recovery and Insolvency Practitioners, based in Preston and covering the whole of Lancashire, Cumbria and north Cheshire. He is familiar with the whole of the North West and is a proud Lancastrian.

Paul has over 15 years experience dispensing advice and providing solutions to distressed individuals, businesses and companies. Paul is also qualified as a Personal Insolvency Practitioner, passing in 2010.

In public life, Paul has stood for the Liberal Democrats across the North West. He was elected to Wigan Council in 2010, retiring in 2014 after a full term and serving on Child Services, Adult Health and Council Scrutiny committees. An active ward councillor, Paul regularly attended local meetings and fully participated in all council meetings, speaking up for residents.

With vast experience in public bodies, Paul has worked in the Civil Service in the former Benefits Agency and the Department for Work and Pensions between 1997 and 2003. Paul adjudicated claims to Carers’ Allowance before developing training within the newly formed Pension Service. In his Civil Service career, he often dealt with people on low incomes and demonstrated empathy, assisting with the difficult process of navigating an often complex benefit system.

Paul has led a range of campaigns, with a focus on community facilities, transport links and housing. Paul enjoys dealing with 'bread and butter' issues, whether securing grants for disabled people to secure electric wheelchairs, assisting with housing applications or ensuring grot-spots are cleared.

Nationally Paul is strongly opposed to Brexit and believes we are stronger in the EU.