We must be getting nearer election time! It feels like no time at all since my newsletter last month, but my feet haven't touched the ground.

During the February recess, I had a week campaigning in Cornwall. We are in coalition there with the Independents and have high hopes of making significant gains in May. I toured round from North Cornwall, down to Penzance, Newlyn and area, and then finally on to Looe and Saltash.

I was much encouraged by the energy and commitment that our 41 councillors and many more candidates are doing at the moment, and if you fancy a working break over Easter, your help will be much appreciated. 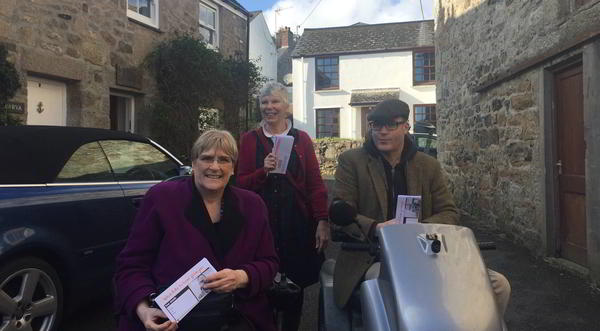 I was seriously impressed going out canvassing in Newlyn with candidate Theo Blackmore and colleagues. It's the first time two wheelchairs have gone out together. Good luck, Theo!

On 23 February I had the privilege of joining our team at the count in Stoke-On-Trent. Dr Zulfiqar Ali and his team (with me, Ed Fordham and Chris Lovell in the photo - many more behind the scenes) did a brilliant job doubling our share of the vote. Paul Haydon and I had real trouble getting there on the day, with Storm Doris doing her best to stop us. 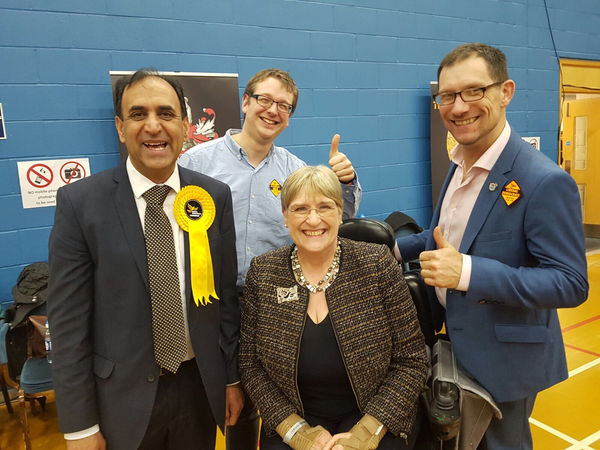 Rebecca Hanson and her team, led by Andy Sangar, also doubled our vote in the Copeland by-election on the same day.
I want to thank Rebecca, Zulfiqar and their teams, including the many volunteers, for showing that we are recovering well.

On 4 March I headed off to Cambridge, followed by Suffolk - to help launch their County manifesto, and finally to Norwich South for their Annual Dinner. An amazing 24 hours, back in my former home territory of East Anglia. Once again, I was cheered by how active our council candidates are.

Last weekend I attended the Scottish Conference in Perth. The Dewars Centre was full of Lib Dems - on an ice rink, but safely covered so we didn't slip! 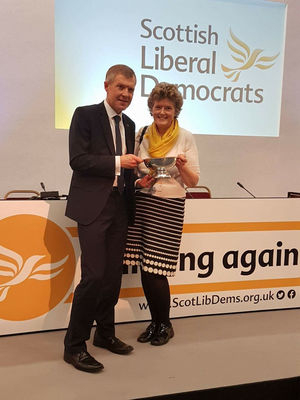 As with Wales, our Scottish party has a very clear and separate identity, led brilliantly by Willie Rennie. Here he is awarding the membership award to the amazing Elaine Ford: she has an enviable reputation for contacting every new member and helping them to get involved.

And running all alongside this has been the Bill to trigger Article 50 in the House of Lords.

We, alone of the parties, stood our ground during the final stages of the Bill when Labour and most of the cross benchers decided to give in. We felt it was vital that someone stood up for the 48%.

What was just bizarre was the Labour Leader in the Lords arguing that they would still fight, but in different ways. This was as Jeremy Corbyn was supposed to be leading a Momentum demonstration to tell the Lords to support our amendments. In the event, Corbyn failed to appear, and the Labour Party (with a few honourable exceptions, sat on their hands).

So now we are in a post triggering Article 50 world - but there's another by-election with us: Jackie Pearcey has been selected to fight Manchester Gorton. I've known her for close to twenty year, and I cannot imagine a better local candidate. 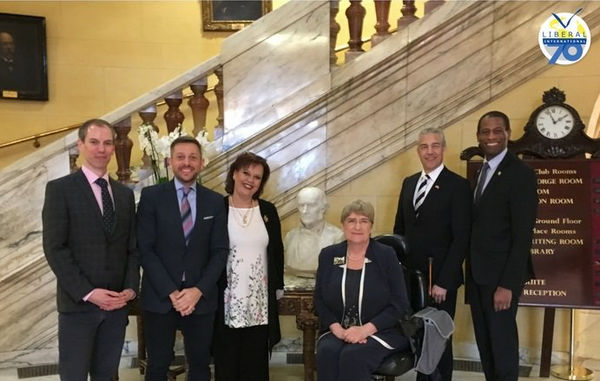 We're fighting Manchester Gorton just like Witney - it has been a very good seat for us in recent times, so if you can help, please do.

Earlier this week I met MPs from our sister party, the Canadian Liberals. We discussed revival and success, theirs notable, ours well on its way.

The fact that our membership numbers have doubled since 2012 to over 85,000, with more joining by the day, makes me incredibly proud to be your president.

I hope to see you at Conference in York to celebrate our success and to plan how we will fight Brexit further!