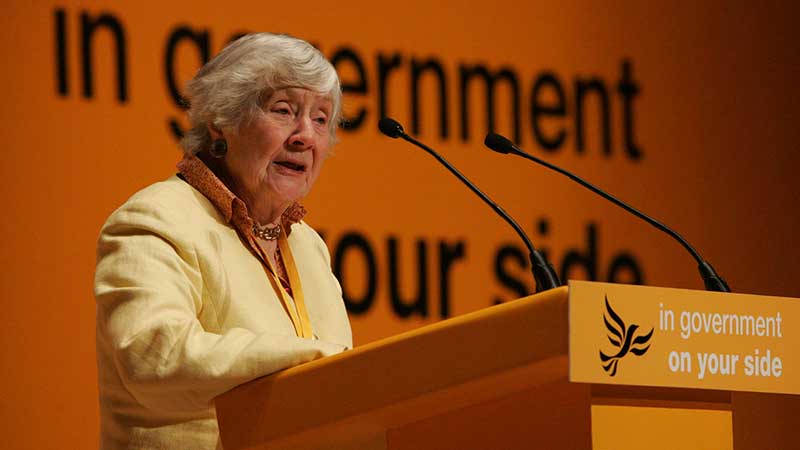 Baroness Williams of Crosby is better known to us all as Shirley Williams, one of the “Gang of Four” who dramatically left the Labour Party to form a new political party, the Social Democratic Party.

Shirley Williams was born in 1930. She became the first woman General Secretary of the Fabian Society in 1960, and in 1964 was elected MP for Hitchin. She was a member of the Wilson and Callaghan Governments in the 1960s and 1970s, culminating as Secretary of State for Education and Science, and Paymaster General in the cabinet from 1976 to 1979. She lost her seat in the 1979 election.

Shirley Williams, was one of the ‘Gang of Four’ MPs who founded the Social Democratic Party and was its first President from 1982 until 1987. She was an MP, intermittently, between 1964 and 1983, representing the seats of Hitchen (later Hertford and Stevenage), and Crosby over a period of two decades. Her victory in the Crosby by election was the first electoral victory for the SDP.

By 1980 the Labour Party in her view was veering into left-wing extremism, and in 1981 she co-founded the Social Democratic Party as one of the “Gang of Four”. She became the first MP elected for the SDP in a 1981 by-election in Crosby. From 1982 and 1988 Shirley Williams was elected President of the new party. Shirley Williams strongly supported the merger of the SDP with the Liberal Party into what was to become the Liberal Democrats.

Shirley Williams lost her seat in the 1983 General Election following boundary changes. She became Public Service Professor of Elective Politics at the John F Kennedy School of Government at Harvard University from 1988-1996. She has lectured at Cambridge, and in Princeton, Berkeley and Chicago in the US.

Shirley Williams was married to the late Professor Richard Neustadt, a leading expert on the US Presidency.

She was appointed to the Lords in 1993 and served as the Party’s spokesperson on Foreign and Commonwealth Affairs in the Lords from 1998 to 2001 and was elected Leader of the Liberal Democrats in the House of Lords in 2001 serving until September 2004. She became in 2007 adviser to the Prime Minister on nuclear proliferation, has been a member of the board of the Nuclear Threat Initiation (NTI) of Washington DC for over ten years, and the only British member of the International Commission on Nuclear Disarmament and Proliferation and chairman of judges for the National Teaching Awards. She published her autobiography, Climbing the Bookshelves, in 2009.

Shirley Williams is the recipient of thirteen honorary doctorates and remains a frequent broadcaster and prominent public figure.