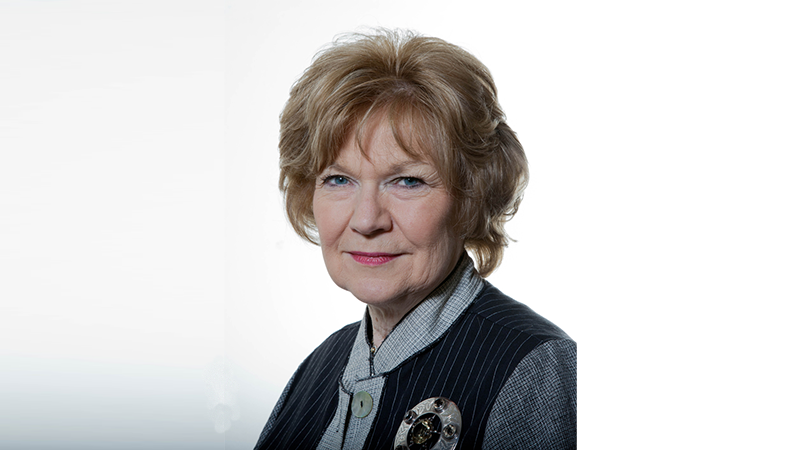 Sue Garden was born in London and read Modern Languages at St Hilda's College Oxford. On graduating, she married a fellow student (the late Lord Tim Garden) and moved over twenty times during his RAF career. She was a teacher in England and Germany, was a volunteer with the Citizens' Advice Bureaux, a welfare counsellor and military caseworker. Settling in London, she joined City & Guilds to work on vocational qualifications from 1988 - 2000, continuing in an advisory role until 2008.

She has been actively involved with educational and charitable organisations, is a member of the World Traders' Livery Company since 2000, and Master of the Company 2008-09. She was a candidate in the Camden local elections in 2002 and Parliamentary candidate for Finchley and Golders Green in the 2005 general election. She was appointed a life peer in 2007,a Privy Councillor in 2015 and is a Deputy Speaker.

From 2012-2013, she led for the Government on Higher Education and Skills (BIS), and was Whip/Spokesperson for Education (DfE) and Defence (MOD). From 2014-2015 she was spokesperson for equalities and whip for education and DEFRA. From 2013-2019 she was on the Council of the UK- Japan 21st Century Group. Since 2014 She has been a Vice-President of the War Widows Association. She is a Fellow and Vice-President of City & Guilds (FCGI),) and Honorary Fellow of the Chartered Institute of Linguists (HonFCIL). She is on the Council of the Air League, President of Camden Liberal Democrats, Patron of Hampstead Counselling Service and chairs the Cadet Health Check team.

Her older daughter is Chief Executive of Hampshire Hospitals, the younger is a primary school teacher. Both are married with two children each, grandsons at university in Glasgow (computing), Bath (economics) and Southampton (music) and a grand-daughter studying for A levels