The sad passing of Paddy has left a huge dent in our political life. He was a leader, a friend, an adviser and, more than anything else, a man buzzing with vision and ideas. You always knew when Paddy was in the room that a suggestion, a policy, a strategy was not far away. He took our party from an asterisk in the polls to a major force in British politics. Yet he always remained self-effacing, never seeking personal glory, apologetic to anyone he might offend with his ideas.

Paddy never forgave me for doing a better job than he did at piloting the Mumbles lifeboat. We had arranged to launch the main lifeboat down the slipway as part of our campaign for the first Welsh General Election in 1999, to demonstrate us as a party of speed, direction and action. 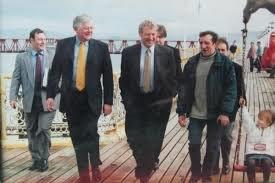 Once we were out into Swansea Bay, we took it in turns to pilot the lifeboat, but I was able to steer a straighter course than Paddy! The TV cameras caught the launch but not the steering thankfully!

In recent years we got to share the backbench in the Lords Chamber. Paddy would inevitably be doing two or three things at once: writing a chapter of his next book; listening to the debate and inevitably gossiping. Neither Paddy nor I are good at sotto voce, and the gossiping got frequent dark stares from the Lord Speaker.

He never stopped generating ideas. He had so much more to offer and we will miss him terribly. Our thoughts and prayers go out to Jane and the family.

A memorial service will be held in London in a few months’ time, and discussion is ongoing as to how we can develop a lasting tribute to this great man and the influence he had on our political life.

This tribute is the first in a series that we'll be sharing in celebration of Paddy's life. If you'd like to contribute your own piece, please email us at [email protected].