The Vagrancy Act - how we won

It’s not every day you get to say you changed the law.

I am elated that after four years of persistent campaigning, the Vagrancy Act is on the brink of being repealed. The Government has bowed to cross-party pressure and tabled an amendment to the Police, Crime, Sentencing and Courts Bill to repeal the Vagrancy Act 1824 in full. This archaic and cruel law has finally been consigned to history, and no one will be criminalised for sleeping rough again.

This campaign has been long and hard-fought. It is a testament to the hard work and persistence of my team, our third sector partners, cross-party colleagues, and the students who first raised the issue with me.

It was a group of Oxford University students who first brought me a petition in 2018 to end the criminalisation of rough sleeping. They were concerned at the manner in which homeless people were being treated by police, and the national approach to homelessness which seemed to favour pushing the problem away. I shared their outrage and agreed to take the petition on.

You have to pick campaigns carefully, based on what inspires you but also what matters to constituents. For my constituents in Oxford West and Abingdon, rough sleeping and homelessness is an issue that has always been close to our hearts. Oxford attracts significant numbers of rough sleepers from the surrounding county and we saw with our own eyes that many were treated extremely harshly. I and my constituents saw vulnerable people being threatened with arrest and aggressively moved on, rather than being treated with compassion and offered support.

We recognised that the Government has started to appreciate that the landscape around homelessness wasn’t right. They had begun to change legislation and change their approach, but were not targeting the most punitive parts of legislation.

What followed was a strategic campaign, fought using the full range of Parliamentary tools available to us and in conjunction with third sector partners.

In order to amplify our voice and raise the profile of the campaign we contacted homelessness charities. The campaign began to gather momentum when Crisis decided to take it on as a major campaign. While the issues surrounding homelessness are vast, the Vagrancy Act provided a useful hook. 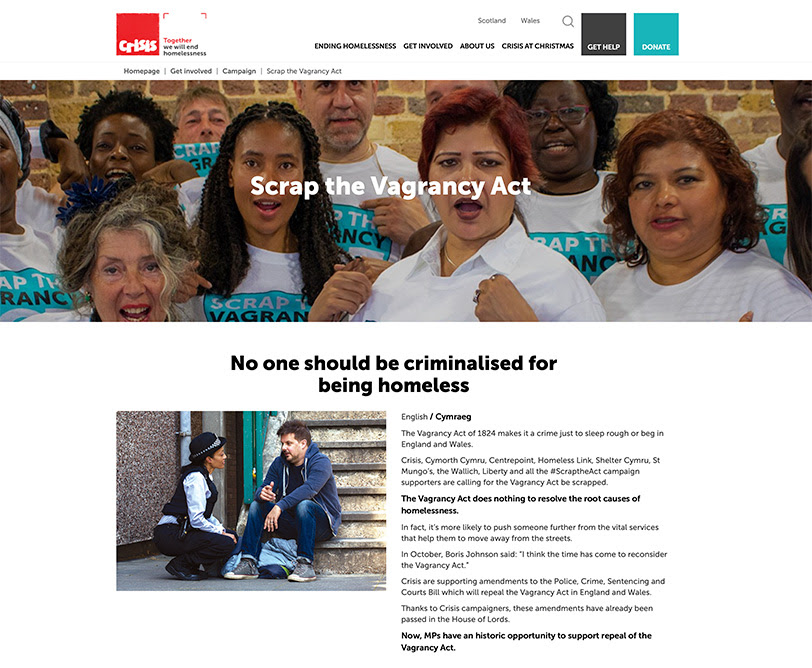 In conjunction with partners, Crisis conducted research and hired lawyers. We investigated how the Act was used by police forces and compared the situation in England and Wales with Scotland, which had already repealed the Act. We held an event in Parliament and invited those with lived experience of homelessness and being threatened with arrest to share their stories.

As well as utilising connections with the Third Sector, throughout the campaign we used the full range of Parliamentary tools available to us. I drafted the Vagrancy Act (Repeal) Bill and presented it to Parliament on 7 May 2018. On the same day I asked the then Prime Minister Theresa May to support the Bill at Prime Minister’s Questions. I have presented my Bill a further two times and asked numerous questions of Ministers. I led an adjournment debate on the Vagrancy Act and a Westminster Hall debate on rough sleeping. I have written numerous cross-party letters to Ministers, and most recently worked with colleagues in the Lords to table an amendment to the Police, Crime, Sentencing, and Courts Bill.

Integrating the campaign into our messaging across the party was essential. We broadcasted a piece on the Channel 4 Political Slot which was taken up across the whole party, especially our colleagues in Wales. To everyone who lent their voice to ours as we fought to scrap this law - thank you.

We recognised that an important part of the strategy was to court Conservative backbenchers. We reached out directly to offices and used the know-how of public affairs teams of our Third Sector partners. We knew the campaign was working when Conservative backbenchers began to mention the Act of their own accord. While we may have been frustrated that they were piggy-backing on a campaign that we started, we persisted.

For me, the story of this campaign is a story of how Liberal Democrats can get things done. We may be the fourth-smallest party in Parliament, but with the right campaign and the right approach we can effect change.

I want to thank everyone in my team, our partners Crisis, the students who raised the issue, and cross party colleagues for your work and support throughout this campaign. It was our collective efforts plus your invaluable support, persevering over a number of years, that won this success.